Al and I have 5 children and 12 grandbabies!  (including one set of TRIPLETS ~ and BELIEVE ME ~ TRIPLETS are a TRIP!!!)
The Summer of 2001, I received my Master Herbalist Certificate (MH) - from Dr. Christopher's School of Natural Healing. The Master Herbalist program is a three year course on the study of herbs and other natural remedies. You never can learn everything, but - the course did give me a very good understanding of herbs, and their many properties, and how to teach people to use herbs and other natural remedies in the place of many drugs. We believe that God wants to heal people naturally, without the use of drugs. The vast majority of people who are on drugs could be off them, if they would only change their diet and lifestyle and use the natural remedies including herbs, that God has given us. Drugs always have side-effects, and rarely cure a disease. In our Health Food Store , that is one of the things we tried to do the most, is to educate our customers on the benefits of herbs and natural remedies for their health problems.

If you are interested in becoming a Master Herbalist I recommend the Dr. Christopher's School of Natural Healing site. If you sign up, be sure to tell them that I - Tammy Roesch - sent you! I took only the Master Herbalist course, as I am not a believer in reflexology and iridology. Both of those fields tend to be very mixed up with the New Age healing practices.

I was raised as a vegetarian. I have never had even a bite of meat, ANY kind of meat, including fish or chicken, in my entire life. When I was 13, I gave up dairy products and became a vegan. Al had just become a vegan before we met, and of course we have raised our children to be vegans, also.

In 1995, we started a health food store out of our home, and it took off with a bang! We outgrew the garage - where the store was, in a year, and moved our little store to an old, unused gas station. We outgrew that location within the next year, and finally bought a piece of property, in Geneva, OH, that had a large building on the highway (it had been vacant for 2 years) and 6 acres of land. The store continued to grow as we were pretty much the only health food store in the area, and our prices were really good and we had a very nice selection.
This is a picture of our store, when we owned it: 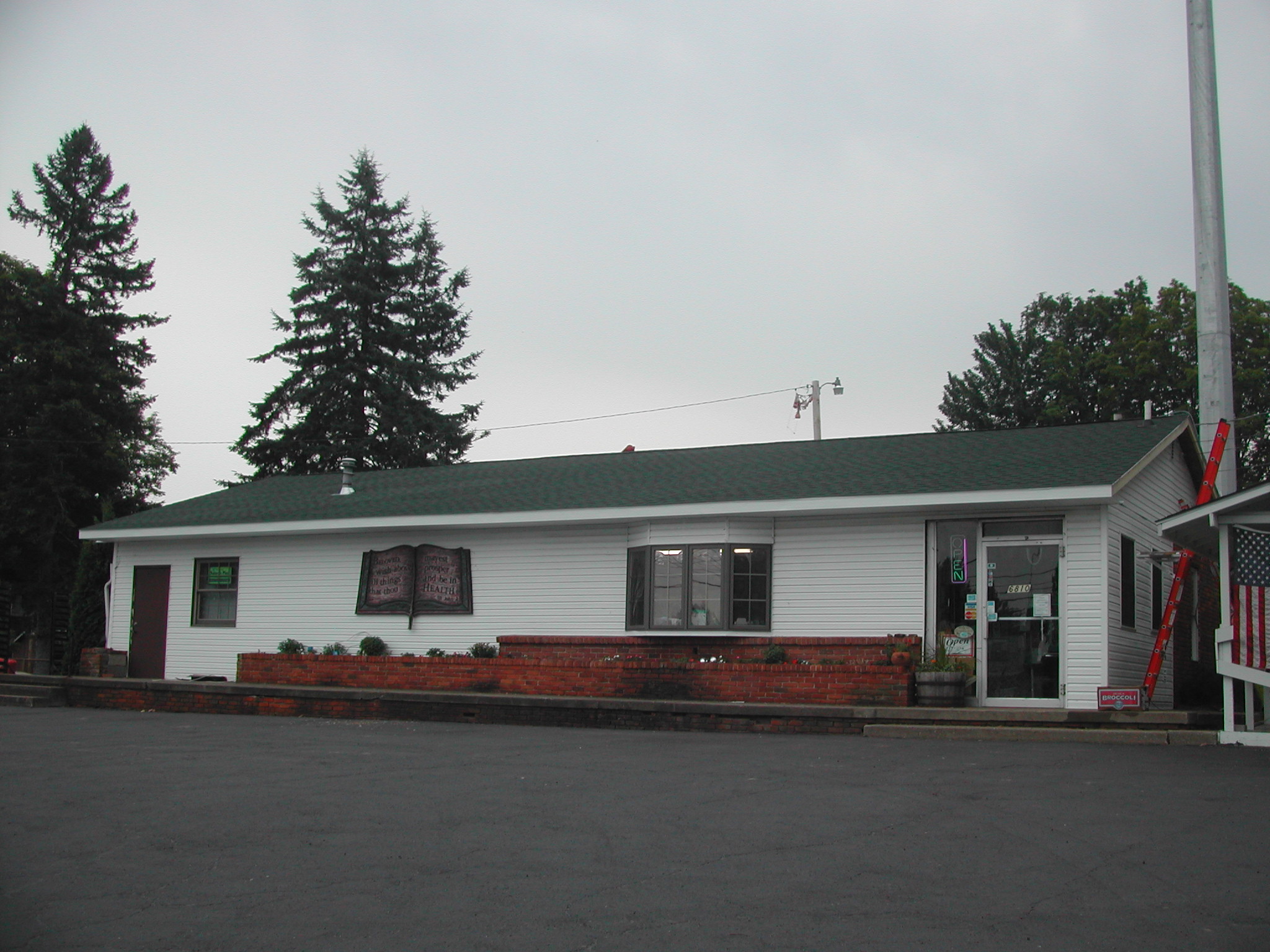 And here is a picture of the little cabin we lived in for 5 years before we sold the store in January of 2005, it was only 16X24, with a loft upstairs: 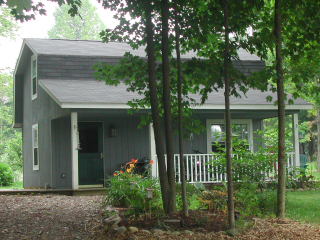 In 1996 or so, (been a long time, I forget exactly) we started carrying what was then, Aim Barley Green. We carried that product for about 5 years...Aim Barley Green used to be probably the most popular barley green product. In the last few years, some things have changed at Aim, and they now have a product called Barley Life. At the same time we started carrying Aim Barley Green, we brought on another product called Master Formula.  At the time, it was made by a company called Sulin out of UTAH. We began to have wonderful results with the Master Formula product, and eventually got to where we were literally selling 50 Master Formula to every 1 Barley Green! Eventually, we decided to drop the Barley Green and just sell the Master Formula. Well, around 2000, the Master Formula company sold out to a new company, and well, things just weren't the same....we decided it was time that we come out with our own product! Next thing you know - we had "Better Than Greens". Better Than Greens is 95% the same formula as the Master Formula, it just tastes a whole lot better, (because we added stevia) and it does a better detox on the liver - twice as much milk thistle extract!  We also took out the wheat germ, so it is a true "gluten-free" product! And on top of that, we can sell it for ALOT less money, as we are a small, family owned company - not an MLM with lots of people upline to pay!
Within a few years, we were selling 400 Better Than Greens a month, just out of our little store. By 2005, we decided it was time to sell the store. The business was going very well, but our kids were going off to school, one by one, and there was more work and less hands....so we put the store up for sale, and it sold very quickly. The plan then, was to take the Better Than Greens to the road...which is what we did for the last year and a half. Al and I traveled from state to state, store to store, doing demos in health food stores across the Country. Eventually, we got tired of living out of suitcases and sleeping in motels and in 2008, we purchased 7 acres of land, built a home here in Kingsville, OH. We now do all the shipping from OH as well as the order taking.  I usually answer the phone and process the orders online, and my husband packs all the orders and handles all the shipping details.

Our son Dustin built our home for us, and our younger son, Levi helped us clear the land and plant over 100 fruit trees, blueberries, raspberries, grapes and several thousand strawberries.  We grow a good sized garden every year, and can and freeze as much as we can.

If you are ever in the area, please give us a call and come and visit us!  We love visitors!
Al & Tammy ~ Testimonials
My lab results showed no signs of anemia after using BTG
I'm a customer of yours and one of my friends, Joan is now ordering from you and I just ordered two ...